Skip to content
ELIZABETH: THE STORY OF A GERMAN IMMIGRANT  Elisabeth left Germany “under cover of darkness” to escape an intolerable situation, leaving her five children and an abusive husband behind. After arrival in America, she spent years trying to reunite the family. This is a love story, a tale of family interwoven with the history of America from 1864 until 1895. This tale will appeal to genealogists, who will recognize the use of family history research tools; historians, who will appreciate the inclusion of landmark events in the regions discussed (New York – state and City, Jersey City, and Chicago, primarily); and romanticists, who will enjoy the courtship of Elisabeth and her inner turmoils as she recognizes her love for her suitor.

I opened the door just a few inches … enough to peer inside to see if any lamps were lit. None were. Then a few more inches so I could slip my head inside to listen for the sound of snoring. I heard nothing. This was both good and bad. It meant my husband was not home, awake or asleep. But it also meant that he very well might come home and, as late as it was, would be roaring drunk. If I could get in and to sleep myself (or at least appearing to be asleep), maybe I could get through the night without a beating; but as soon as he noticed the children were not there, either tonight or tomorrow morning, I was sure to suffer the consequences. I went in and, without lighting a single lamp, went to the back of the cottage to the sleeping area to prepare for and slip into bed. I brushed out my long, coal black hair, without even bothering to try to see my reflection in the glass, and recalled the events of the day, and my life, and how it was about to change drastically.

There was an irony in the entire situation: I often found my only solace in the church – the candles and the music often soothed me, especially after an evening of Thomas’s drinking and the resulting tirade. I could go to mass and disappear from the reality of pain and hopelessness, which had been my lot more and more of late. Yet that same place where I found comfort also held me in the prison that was my marriage. I was bound to Thomas and had no recourse, unless he was guilty of adultery (which I had no proof of and which I did not choose to bring up, lest my suspicions be wrong and his beatings become even more severe). Until he died, I was his, to do with as he saw fit. Perhaps that was one reason that, when Philipp spoke of organizing our papers in preparation for our journey across the ocean, we both agreed not to speak to our respective clergy to get copies of our confirmation or baptismal certificates. Not only would such an action alert the church authorities to our plan, but we both seemed confident that, once in America, we would seek new religious affiliation for ourselves. But leaving behind our religious tradition paled in comparison to leaving behind our children and loved ones.

I wanted to keep my mind active so that I would not fall asleep – I had to be awake before dawn to leave for the depot. I did not dare oversleep! So I kept my mind busy with imagining what it would be like in America. . . I started to think about Philipp: He was eleven years older than I, had treated me like a little sister for as long as I could remember, was always helpful and courteous. But had I seen something else in his eyes, in these latest meetings with him? Something more like admiration, and not the kind one has for a sister. Surely I was imagining things, but it still seemed as if there was another feeling that was fueling his concern for me.

I heard a noise . . . was the door opening? Was that Thomas coming in? What time was it? I was dressed in traveling clothes, under my nightgown, but with Thomas not home early, I had little concern that he would even notice. If he did stumble in now, he would just fall into the bed and sleep. When he was in that state, the train depot could be in our parlor and he wouldn’t notice! So the later he was, the safer I was. I listened without breathing . . . but I heard nothing more. It must have been the wind. I continued to go over the plan in my head.

I had to catch the train to Bremerhaven by 6:00 in the morning (Mina would accompany me to the station), then I would meet Philipp at the docks at Bremerhaven; I had very little time. . . Philipp had the tickets and had taken care of the paperwork necessary; he even had my passport so there would be no danger of Thomas finding it and destroying it. I had sewed what money I had into lining of my carpetbag. . . I had left my traveling items hidden near the front door under the table skirt so that I would not have to risk making noise carrying them from the sleeping area to the door. So what I planned to take took up very little room and was well hidden . . . as long as Thomas didn’t sit down at it and try to put his feet under the table skirt. That wasn’t likely, I mused: he was never sober enough when he got home to have any business sitting at the table.

Probably about the same time that Mina was getting up to meet me, I heard the sounds I’d been listening for since I laid down on the bed: the arrival of my drunken husband. It was still dark outside, but only an hour or so before I would have to leave, if I was to meet Mina and catch the train. I heard him stumble through the front room and I prayed that he would not stay in the parlor or try to wake me or the children. If he found the children missing, I decided I would just get up and run. Since I was already dressed – I even kept my shoes on and just wrapped them in a blanket so, I prayed, he would not notice. I could conceivably run through the house and grab my bag and be out of the house ahead of Thomas (he would not have enough coordination to succeed in catching me, I was sure; or at least I hoped I was sure). But he neither went to the loft – which he never did any way (what was I thinking?) – nor did he stop in the parlor to collapse on the settee, which he sometimes did, too drunk to make it to the bedroom. Instead, he came straight (well, more crooked, really) into our bedchamber and fell onto the chair in the corner. Within a few minutes he was snoring loudly. Once I was sure he was asleep, though it was still about thirty minutes before I needed to leave, I quietly slipped out of bed. I removed my robe and bunched it up, hopefully to resemble a body in the bed (just in case Thomas woke up and looked over to see if I was in there … maybe he would be fooled for a short while, enough for me to make my escape). I moved cautiously through the dark house to the front room, slid my meager bag out from under the table, and opened the latch on the door, cringing to hear it clack into the open position (I had never before noticed how loud that latch was). I stopped to listen if Thomas’s snoring stopped . . . it didn’t. Out of the door I went, closing it behind me as quietly as I could.

Currently available only in e-book form, click “book” image to order the book for Nook format through Barnes & Noble for $14.99. This book is set up for single downloads that cannot be copied from one device to another so be certain to have your download setup for the device you wish to use. This can also be purchased directly from me on either CDrom or flash drive ($20 – in PDF format that can be downloaded to as many devices as you like). 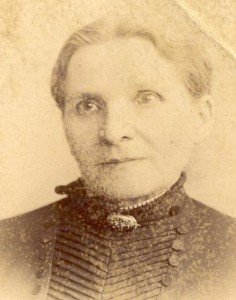 Read the backstory on my blog. Click on my Elisabeth impersonation photo below: